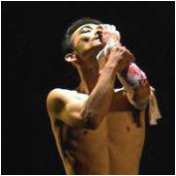 Kenji was born in Japan and received his initial training in Tokyo at the Studio Ichibangai, The Performing Dance Center and the Japan Broadway Dance Center.  He danced professionally throughout Asia for several years while additionally becoming proficient in gymnastics.  Kenji earned his B.F.A. from California Institute of The Arts.  He has performed locally in Dance Kaleidoscope, Jazz Dance LA, Dance Spectrum and Praxis Projects.  He placed first at the Japan National Jazz Society Competition, and first and second place at the Palm Desert Dance Under the Stars Competition.  As a dancer in Kin Dance Company at the Linhart Theatre in New York City, the dance legend, Gus Solomons, Jr., described him as "a slight dancer with huge flexibility, who’s every move looked studied for perfection of line."  Lewis Segal refers to his choreography as "earthy and danced brilliantly."  He was recently awarded Pas De Deux at the Ninth Annual Dance Under The Stars Choreography Festival in Palm Desert, California.

Kenji started his own company, Ken Dance Company (KDC) in 2005.  KDC’s first show and performance, “Spirited Astray,” premiered at the El Portal Theatre in the NoHo Arts District in April 2007.  He later adapted and restaged this performance for three dancers to tour New York City at the Theatre For The New City, the Atelier Fontaine in Tokyo, and the Secret Rose Theatre in the NoHo Arts District in Los Angeles in 2008 and 2009.  In 2011, Kenji choreographed and presented, “3.5 Dimension World,” at Kitazawa Town Hall in Japan.  For this production, he auditioned and cast local dancers from all the prefectures in Japan. 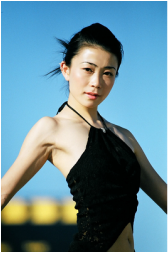 Kana began her dance training at age three in Japan, studying at the Mayumi Minokami Ballet Studio.  She performed in their productions of Swan Lake, Coppέlia, Don Quixote, The Nutcracker, Sleeping Beauty, La Sylphide, Raymonda and more.  While in Japan, she studied jazz dance with Kanako Fukuoka and Rei Aoo.  Though she loved ballet, she was drawn as a performer to jazz and contemporary dance.  She moved to America in 1997, continuing her dance career with KIN Dance Company, AnNamx Dance Production, Vox Lumiere, and most recently, Ken Dance Company (KDC) as a dancer and assistant director with founder and artistic director, Kenji Yamaguchi.  As a dancer in Kenji’s works, she was described by the Los Angeles Times as “elegantly tethered to an earthbound sorrow.”  Her solo work has also been called “gripping and soul-searching.”

Kana also works as a choreographer/dancer for J’s Hair Studio & Academy Inc., for their ISSE, IBS shows and Japan tour of 2014.  She recently organized a ballet and jazz workshop tour to Avex Artist Academy in Tokyo, Nagoya, Osaka, Fukuoka and other local studios in Japan.  She teaches ballet in the Los Angeles area at Edge Performing Arts Center, Hama Dance Center and Millennium Dance Complex.

Takeshi Hamagaki, fondly known by his dance students and the dance community as “Hama,” has danced and performed on Broadway with many prestigious performers and choreographers throughout the world--from New York City, to Las Vegas, to Miami, to Puerto Rico.  He began his dance career with the Toho Theater in Tokyo, which produced film and stage productions and numerous variety shows.  At Toho, Hama studied all forms of dance with the leading dance masters of the time and was the company’s principal dancer.

Moving to the United States in 1964, Hama studied many types of dance in New York City and performed at Carnegie Hall.  He taught at the Harkness Ballet Company and was an assistant to renowned jazz dance master and artist, Luigi, at Luigi’s Dance Center in Manhattan.  As a protégé of Luigi, Hama developed his personal dance skill, talent and artistry as a master teacher and choreographer in the “Luigi-style,” then continued on in developing his own unique signature style.

After moving to the West Coast in 1971, he taught at many leading dance studios in Hollywood and performed as a lead dancer in shows in Lake Tahoe, Miami Beach, Puerto Rico and Las Vegas.  Through the 1970’s and 80’s, Hama performed in countless TV and movie projects with celebrities such as Lucille Ball, Shirley McLaine, Mary Tyler Moore, Don Knotts and Debbie Reynolds.

After many years teaching hundreds of students in LA’s best dance schools and studios, Hama opened his own studio, Hama’s Dance Center, in Glendale, CA, in 1991 through 2000, and in 1998, opened his studio in Studio City, where he continues to teach.

In 1995, Hama was honored with the prestigious Lehman Award, which recognizes the revered greats and pioneers of dance.  He was also an honorary dance instructor at USC for over ten years.